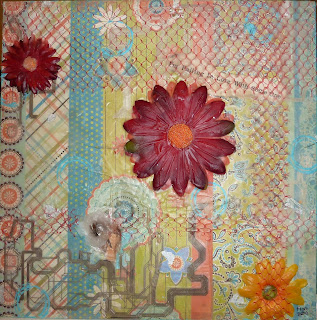 Falling In Love With Someone by Finijo
I went to the Mixed Media Workshop at Mariposa Studio this afternoon and the photo above shows what I churned out in about 2 hours. I enjoyed the workshop and Jodie and David Gonzales inspire creativity. Lately, I have been having trouble initiating projects at home, but going to the workshops at Mariposa seems to have jump started my creative juices. I hope some of you decide to join me at Mariposa, because the experience is great for beginners and experienced artists alike. The next workshop is another Chagall and Chardonnay, this Thursday, August 26th.

Posted by finijo at 6:52 PM No comments: 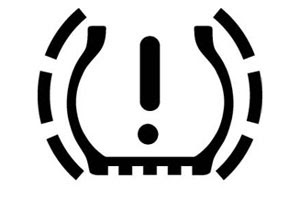 I saw this symbol on Yahoo News today and the title of the article was: Do You Know What This Symbol Means? It was immediately clear to me that this is the symbol for "Your Ass Is Getting Fat." The article mentioned that the symbol is "idiot proof," so I read further and found that it is , in fact, the warning symbol for low tire pressure. I am an idiot :(
Posted by finijo at 4:59 PM No comments:

All My Friends Are Superheroes 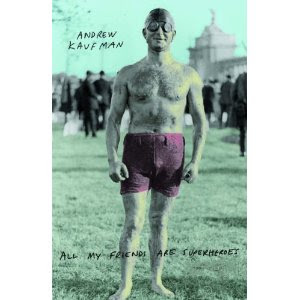 I just finished reading All My Friends are Superheroes by Andrew Kaufman this morning. I just started reading it last night. It is a very short book, 108 pages, and it is wonderful. Kaufman wrote a quirky, funny little book. It is also romantic and a little sad. I would love to see the characters of the book populate a TV series or a series of movies. It wouldn't be like Iron Man or Batman, because the superheroes are all fairly average people who have discovered the thing about them that makes them extraordinary. For some it is a blessing, for others a curse, and for the reader, it is a couple of hours of reading joy. 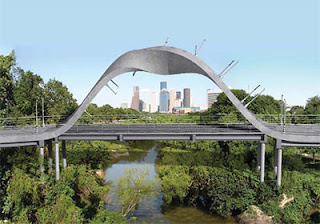 We hope you will continue to keep abreast of ADL news, programs and services at the national website, www.adl.org. Thank you for taking the time to share your thoughts with us.

I am absolutely mortified by the stance the ADL has taken against the building of the Islamic cultural center near ground zero in New York City. If ever there was a way to show the terrorists who perpetrated the horror of 9/11, it would be to stand up proudly and show them that we will not only rebuild, but we will do so with tolerance and love. There is no other weapon that will defeat the hate that spawns terrorism - period. After 10 years of fighting, bloodshed, and loss of life, we must face that taking arms will not solve the problem of terrorism. It is time we tried something different, something radical - the use of ideas, tolerance, and understanding.

Blocking the Islamic cultural center is short sighted at the very least, but it is at it's essence an act of religious intolerance. Opposition to the Islamic cultural center is as ludicrous as opposition to a Catholic church near the memorial at the site of the Murrah Federal Building bombing by Timothy McVeigh, based on his Catholic upbringing. Fear is not the way forward, it is the way to stay mired in an untenable position.

Because I cannot put it better myself I am quoting Fareed Zakaria in the article in Newsweek:

The ADL’s mission statement says it seeks “to put an end forever to unjust and
unfair discrimination against and ridicule of any sect or body of citizens.” But
Abraham Foxman, the head of the ADL, explained that we must all respect the
feelings of the 9/11 families, even if they are prejudiced feelings. “Their
anguish entitles them to positions that others would categorize as irrational or
bigoted,” he said. First, the 9/11 families have mixed views on this mosque.
There were, after all, dozens of Muslims killed at the World Trade Center. Do
their feelings count? But more important, does Foxman believe that bigotry is OK
if people think they’re victims? Does the anguish of Palestinians, then, entitle
them to be anti-Semitic?

What I can (and did) do is to contact the ADL and voice my disappointment in the shameful position they took when they put aside the mission of their organization to pander to fear and hatred. I am not unsympathetic to the pain that 9/11 caused the families, but I do not agree with their stance on this issue. This is the message I sent the ADL:

My father is Jewish and my mother is Catholic. I have been Buddhist for more
than 20 years. In my life and in my home I practice religious tolerance and I
have believed my whole life that the ADL stood for the principles that I was
raised with and that this country was founded on. The stance taken by the ADL
against the building of the Islamic cultural center in New York is wrong. It is
an example of fear based religious intolerance, which I have always believed the
ADL to be fighting. Shame on the ADL for not practicing as it has preached. I
truly hope that this decision will be rectified.

Fareed Zakaria returned both the plaque and the $10,000 honorarium he received from the ADL in 2005 when he was awarded the Hubert H. Humphrey First Amendment Freedoms Prize. Zakaria's return of the award and the money will likely subject him to ridicule and possibly cost him professionally and financially, but he used his First Amendment right to speak his conscience in a very public way. In my small way, I voice my solidarity.
Posted by finijo at 12:42 PM No comments:

This is video that I shot of Neil Finn singing Private Universe at the fantastic Crowded House show at Stubbs in Austin, Texas. Marilyn and I got to meet Neil Finn and even got a photo with him. Then we got to see the band in action and were enthralled with the show. This was Marilyn's first time seeing them live, but I was lucky enough to see them in 1991 when they played Houston. We braved the heat of a sultry August night in Austin and sweat buckets for the wonderful experience of seeing Neil Finn and Crowded House. I would do it again, given the chance.

Neil Finn has been the source of tears twice in my life. The first was on my 16th birthday when I wept silently on an air plane as I was headed to Little Rock to see family and lamented the fact that I would miss the Split Enz show at Numbers that night. The second time I cried was 1996 when I was freshly out of the hospital after being diagnosed with Lupus and heard the news that Crowded House had disbanded. It just made me very sad to think that I would not have the opportunity to see them live again. They were so very good during this show that I was nothing but a grinning fool from the moment we snapped the photo with Neil Finn till I fell asleep that night back at the hotel room.

Posted by finijo at 3:11 PM No comments: 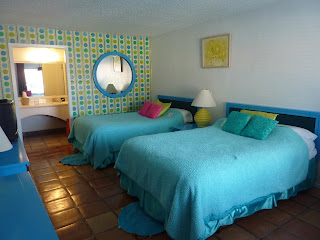 Polkadot Surprise Room 145 by Finijo
We stayed at the Austin Motel when we came to Austin for the Crowded House show at Stubbs. It is truly a funky and strange hotel. Each room is different and each one has a theme. We stayed in the Polkadot Surprise room with wall paper from 1969. The beds had odd turquoise chenille bed spreads and there were multicolored dingle berries on the terry cloth rugs at the foot of each bed. 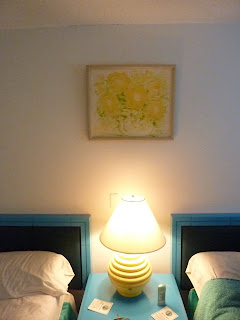 Yellow Flowers by FinijoThere was original art in the room that was surely purchased at a yard sale or second hand shop, but it added to the, ahem...ambiance. Each and every room is different and spectacularly kitsch. We were relieved to find that the beds were comfortable and welcome after sweating ourselves silly at Stubbs. 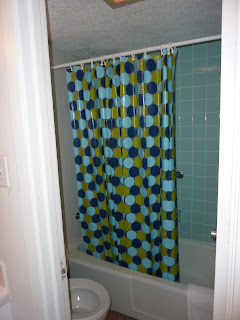 Polkadot Bathroom by Finijo
The bathroom is very old fashioned and the towels are the opposite of luxurious, but we truly enjoyed it. The whole place as a very Austin feel to it. Eclectic and leaning towards hippie-esque. You start to get the vibe when you enter the office to check in and smell incense as you peruse the collection of chachkies and odd collectibles that serve as interior design. 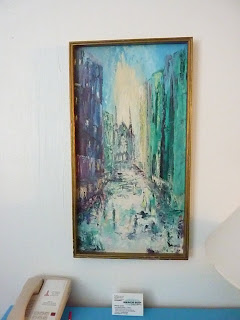 Blue Impressionism by Finijo
Marilyn and I both agreed that we would reframe the art in the room and hang it. This painting was the hands down favorite. No telling who the artist is, but we would like to thank him/her for making us smile. The motel set the mood for our visit to Austin and at $100.00 even (they do not accept discounts), we feel like we got our money's worth. 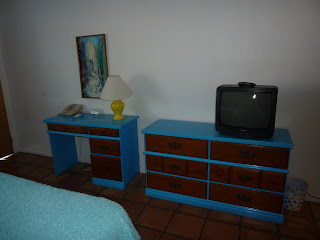 Painted Wood by Finijo
Notice the painted wood dresser and desk resting on the saltillo tile. While you are at it, don't miss the TV from the 1990's and the polkadot tin can trash can. We would definitely stay at the Austin Motel again in the future, but we are thinking that we will spring for one of the suites that overlook the hotel pool next time. Very cool vibe and very nice employees - we enjoyed our stay here.
Posted by finijo at 3:30 PM No comments: